JIRA is popular among project managers, developers and QA experts for its project management capabilities and issue-tracking features. For QA professionals, JIRA provides solid bug tracking and requirements management features that are deeply customizable. These sit alongside great team collaboration features that allow everyone to benefit throughout the dev cycle.

What's the problem then? Well, one outstanding shortcoming of JIRA is the lack of decent test case management. Test case management such as test case creation, execution, and tracking are non-existent within this tool, yet an add-on called Zephyr makes a valiant attempt to bridge this gap. This add-on brings plenty of features to address the lack of test management in JIRA, as well as 'Zephyr reports' to feed back on this activity. With this said, Zephyr for JIRA it still has its shortcomings - as we shall see.

Zephyr was built for test case management. It leverages JIRA’s existing bug-tracking features to manage test cases and their execution. It facilitates work in real time between developers, QA, and project/product managers, thus allowing for close monitoring and updates of the build for overall improved software quality assurance. Although Zephyr has limited reporting ability within JIRA, test case planning and execution is easy and integrated with the JIRA bug tickets; thereby saving time by identifying the execution of previously failed test cases when a bug has been fixed. 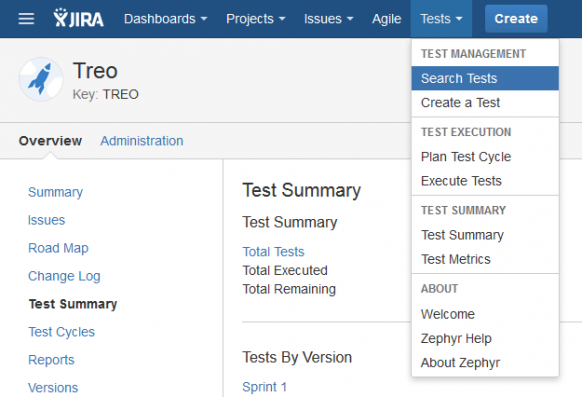 Zephyr integrates seamlessly with JIRA, as seen in the above screen shot of the main project screen - after installation of the plugin a new ‘Tests’ menu option is included in the main navigation bar, and when expanded displays the list of test case management actions available. The options include creation, execution and management of tests, plus test summary and test metrics for monitoring the QA process. Additional options offer help on the use of this tool.

Test cases are written in the same way in JIRA as all other tickets and issues are created - using the ‘Create’ button on the top right hand side of the screen. Test cases, indicated by a new icon -

- are a unique type of issue, with no change to the other standard types of Epic, Story, Improvement and Task. Writing test cases is frankly much easier and more efficient in a spreadsheet tool like Excel than in Zephyr primarily because of the ability to navigate in Excel via keyboard - ie. using the arrow and tab keys. On the browser screen in Zephyr the QA engineer must tab through multiple fields in order to get from one test case to another, so when creating the initial test plan with potentially dozens or even hundreds of tests, this can quickly become tedious.

It would therefore be natural to ask - why would a QA team opt to work with this tool? It does offer some important and useful test case management features that a simple spreadsheet does not, such as:

Zephyr allows the user to create multiple test cycles and view them under their respective versions. Tests can be added singly to an existing test cycle or cloned as a group from another test cycle (also, one test can be part of more than one test cycle). Once all the tests are added to your test cycle the execution phase is clearly organized and tracking of results is easy. During execution a progress tracking bar displays the tests executed and the ones remaining as a percentage. After execution is complete for the current test cycle, create the next test cycle (typically associated with the next version), and clone your desired tests into this test cycle and you're ready to go when the developers next release to your QA environment.

Since JIRA was built primarily to cater to the development needs of the web and desktop applications market, leveraging JIRA for managing mobile application development involves some level of customization.

This option allows the user to execute any test case after accessing its particular test cycle; the user can even run the test immediately without including it in any test cycle (this is considered an ad hoc execution). The execution and tracking of tests becomes easier if they are grouped under test cycles. This may result in the user raising a new issue (e.g. a bug ticket), attaching the test to an already existing issue, attaching visual evidence of the bug and even inserting comments.

Zephyr has a simple and basic reporting scheme as seen below. For a particular project, the number of total tests executed and the tests remaining can be seen in the test summary. The tests can also be seen based on the specific Version or any particular Label under which they are grouped.

The ‘Test Metrics’ option in the ‘Tests’ tab displays the current status of your project with the help of pie charts and graphs, listing the execution details by day, by test cycles or by the name of a particular tester so that their output can be monitored. The test metrics can be customized to reflect the test execution status of a particular version or for a specific time period.

JIRA makes the task of issue reporting easier for QA engineers by including some nifty formatting features. Let's take the example of an issue to show how these features help when documenting bugs.

The  following screenshot shows the issue screen in JIRA. Formatting features are available in the “Description” field to help make it more organized and presentable:

While documenting the issue in the description field, the QA engineer must clearly convey the following information:

As you have seen, the syntax of these features is easy to comprehend and use. The clearer your documentation, the better the developers can understand and resolve the issue.

Reporting metrics on the JIRA dashboard

The JIRA dashboard makes it very easy to view and analyze statistics for different fields such as projects, versions, and users, all filtered and expressed graphically with the help of pie charts, graphs, and other data displays. JIRA refers to these charts and data items as 'gadgets', which can be customized both by their placement on the page as well as their appearance and behavior. You can also set an auto-refresh time period for a gadget, so that there is no need to manually query or refresh in order to see the latest results on your efforts and team.

Whether it's cloud testing, automated testing, functional testing or regression testing, software quality assurance work takes significant time, effort and attention to detail. With some basic knowledge of metrics to watch for, though, there is every reason why any team should be successful at it.

We've discussed many of the benefits of this add-on to JIRA, but Zephyr has some important limitations which must be taken into consideration when evaluating whether this is the proper test case management tool to adopt for your efforts:

As mentioned previously, writing test cases is far more efficient in Excel. One workaround is to create in Excel and import into Zephyr for life cycle management. The test cases can be edited within the tool as updates occur and test execution status changes.

Rapid editing is inefficient - Each edit must be individually saved and the user attempting to use their keyboard must tab multiple times to get to the next/previous row. No real workaround is available for this; and once the test cases are in Zephyr, it doesn't make sense to export the data to excel, edit it there, and re-import since you'll lose all useful history.

There is no facility in Zephyr to group together and list all the test cases which are linked to the same issue. If you have a bug ticket related to a handful of tests, there’s not a simple method to view and execute each of these tests again; this would be a useful way for a team lead to assign work to QA members if it were available.

The status of a single test case execution across multiple application versions cannot be displayed in any sort of report or query. For example, if you have a regression test effort across multiple app versions, you cannot view the results of these individual tests (and entire test cycles) across all these versions. I as the QA lead cannot easily tell that minor test case TC-131 went from pass-pass-pass over the last 3 application versions, whereas critical test TC-223 had a history of pass-fail-fail for those same versions. Having this sort of historical reporting allows the QA lead deeper understanding of the test results and comprehensive risk analysis when reporting to management prior to a production release.

Although there is a way to see a specific list of tests in a previous app version ( for example, all failed tests in the previous version), there is no way to add them as a group to a test cycle for future execution. The QA engineer must manually note each test and individually add them to another cycle. And while writing test cases, images cannot be linked to individual test steps.

Field values change in the reporting when updated

Field values are tied to the actual test case ticket and not to the test ticket in relation to a given test run or test cycle, therefore any history reporting will display the latest value regardless of what that value was in the historical cycle. For example, if TC-133 was changed from a low priority in an earlier version to a higher priority in a later one, if I run a report on that earlier execution results I'll see the current priority of that test case and not the actual value of that field when it was executed. This can cause confusion and potential miscommunication.

So, is Zephyr worth it?

In a software testing service such as what OnPath Testing provides, using the Zephyr plug-in for JIRA can be a great way for QA, project managers, and developers to manage and monitor tests and execution status in real time. It is a useful tool, however the limitations as discussed above must be taken into account and understood in order for a QA team to get the most benefit out of their test effort, while supplying the necessary details when reporting to management.

Good luck, and if you have also used this tool please let us know your thoughts!